We live in a Microservices world, and this world is there to stay. Back-end developers need to dive into Domain Driven Design, write stateless, resilient, highly available services, keep data synchronized through Change Data Capture, handle network failure, deal with authentication, authorization, JWT… and expose a beautiful Hypermedia API so the front-end developers can add a great user interface to it.

Good ! But what about the front-end ?

Let’s say we have several microservices, several teams, several APIs and, therefore, several user-interfaces. How can you create an integrated and consistent user interface so your users don’t actually see that there are as many user-interfaces as there are Microservices? In this article I’m implementing the Client-side UI composition design pattern using Angular Libraries.

Let’s say we have a CD BookStore application that allows customers to buy CDs and Books online, as well as administrators to check the inventory. We also have some complex ISBN number generator to deal with. If we model this application into Microservices, we might end-up splitting it into 3 separate microservices:

We end up with two roles (user and admin) interacting with these 3 APIs through a single user interface:

In a perfect Microservices’ world, these 3 Microservices are independent, developed by 3 different teams and therefore, have 3 different user interfaces, each released at its own pace. On one hand we have 3 different UIs, and on the other hand, we want our users to navigate into what they see as a single and integrated application. There are several ways of doing it, and the one way I’m describing here is called the Client-side UI composition design pattern:

Problem
How to implement a UI screen or page that displays data from multiple services?

Solution
Each team develops a client-side UI component, such an Angular component, that implements the region of the page/screen for their service. A UI team is responsible implementing the page skeletons that build pages/screens by composing multiple, service-specific UI components.

The idea is to aggregate, on the client side, our 3 user-interfaces into a single one and end-up with something that looks like this:

Aggregating several UIs into a single one works better if they use compatible technologies of course. In this example I am using Angular and only Angular to create the 3 user-interfaces and the page skeleton. Of course, Web Components would be a perfect fit for this use case, but it’s not the purpose of this article.

One novelty since Angular CLI 6 is the ability to easily create libraries. Coming back to our architecture, we could say that the page skeleton is the Angular application (the CDBookStore application), and then, each Microservice user-interface is a library (Store, Inventory, Generator).

In terms of Angular CLI commands this is what we have: 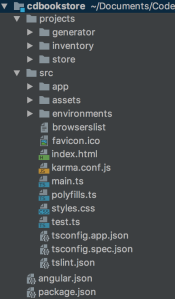 Once you’ve executed these commands, you will get the following directory structure:

The skeleton page is there to aggregate all the other components. Basically it’s only a sidebar menu (allowing us to navigate from one Microservice UI to another one) and a <router-outlet>. It is where you could have login/logout and other user preferences. It looks like this:

In terms of code, despite using Bootstrap, there is nothing special. What’s interesting is the way the routes are defined. The AppRoutingModule only defines the routes of the main application (here, the Home and the About menus).

In the HTML side of the sidemenu bar, we can find the navigation directive and the router:

As you can see in the code above, the routerLink directive is used to navigate to the main app components as well as libraries components. The trick here is that /home is defined in the routing module, but not /str, /inv or /gen. These routes are defined in the libraries themselves.

Disclaimer: I am a terrible web designer/developper. If someone reading this post knows about JQuery and Angular and want to give me a hand, I would love to have the sidebar to be collapsible. I even created an issue for you ;o)

Now when we click on Store, Inventory or Generator, we want the router to navigate to the library’s components

The Store library has a navigation bar at the top, therefore, it needs the routerLink directive. Notice that we only need to use the child path [routerLink]="['book-list']" without having to specify /str (no need to [routerLink]="['/str/book-list']"):

The Client-side UI composition design pattern has some pros and cons. If you already have existing user-interfaces per microservices, and if each one is using totally different technologies (Angular vs React vs Vue.JS vs …) or different framework versions (Bootstrap 2 vs Bootstrap 4), then aggregating them might be tricky and you might have to rewrite bits and pieces to have them compatible.

But this can actually be benefit. If you don’t have extended teams with hundreds of developers, you might end-up being the one moving from one team to another one and will be happy to find (more or less) the same technologies. This is defined in the Chassis pattern. And for your end users the application will have the same look and feel (on mobile phones, laptops, desk tops, tablets), which gives a sense of integration.

With the way Angular Libraries are structured, having a mono repo is much easier. Of course each library can have their own life cycle and be independent, but at the end of the day it makes it easier to have them on the same repo. I don’t know if you love MonoRepos or not, but some do ;o)

We’ve been architecturing and developing Microservices for several decades now (yes, it used to be called distributed systems, or distributed services), so we roughly know how to make them work on the back-end. Now, the challenge is to be able to have a user interface which communicates with several Microservices, developed by different teams, and at the same time feels consistent and integrated for the end-user. You might not always have this need (see how Amazon has totally different UIs for its services), but if you do, then the Client-side UI composition design pattern is a good alternative.

If you want to give it a try, download the code, install and run it (there is only the front-end, no back-end APIs). And don’t forget to give me some feedback. I would be interested to know what you do to aggregate several user-interfaces into “a single one”.